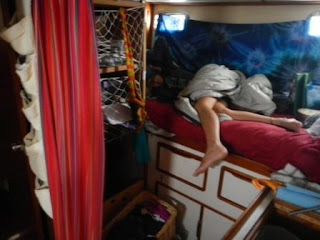 Falling asleep on a boat -especially a sailboat- is an adventure in and
of itself. Some of the most experienced sailors (the kind you hear about
that grew up sailing; born and raised on a sailboat, and the more modest
quiet type that started as city folk, and became well weathered masters
of the roiling waters of the trades and the blissful calm of the
doldrums) have passed years mastering the dark sorcery of earplugs lost
in beds, and the strange witchcraft of that perfect speed where the
droning of the engine drowns out the water maker and the slow creaking
of the walls, but at the same time is not so loud that you can't hear
yourself think.
I hold a great disdain for earplugs. My mother has -so far- gone
through about six pairs of the neon yellow rocket ship ones. But it's
not just the earplugs, oh! no. Mom has her whole system worked out. In
her own words; "When I get off watch at 2:00am, I have my yellow
earplugs. My head is on one pillow right, and then -like I said before-
I have my yellow earplugs in, and then I put another pillow on top.
And, after my watch I'm usually so tired, I just conk right out."I think
they are a lost cause. Literally.
The engine isn't turned on unless we're going less then four knots, so
I can't exactly count on that tactic. My "room" on the boat is a space
about three yards wide by three and a half yards long. A little bit more
than half of the three yards of width is taken up by an elevated bed,
and between the community garbage, and the un-refrigerated food shelves
that I share my room with, the total floorspace is about two and a half
by four feet. Most of which is taken up by a big black case that makes
it possible to get up to my bed without swell assistance (if I time it
right, I can run up, and have the swell pretty much rocket me onto my
bed. Except that it's more like a small hop), and my dirty cloths bin
that rests on top of it. On the more crammed side of the room with the
garbage and shelves, a cloth shower-curtain-like "wall" is the only
division between my room and the galley. One of the loudest, and busiest
places on the boat. So getting to sleep without help is not even an
option for me. Every night I listen to music until I nod off to sleep,
earbuds still in.
Yes, it's annoying, and for sure it's not practical, but hey-how can I
complain. I'm in the middle of an ocean on a sailboat with my mama, my
mommy#2, a substitute for a big brother, a trustworthy captain, and a
best friend who's close to being a sister.