Day 13: Down Time And An Orange Buoy 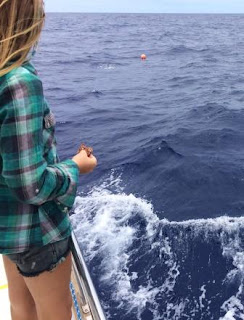 When I was packing for this trip, many people said, "I hope you have a
lot of books" to which I replied that I have a good pile but I doubt
I'll be reading much. "What else are you going to do?" they asked. It
is so hard to explain but it's not a life of leisure out here. It takes
a lot of work and effort to sail and live aboard every day. Busy busy
people are sailors :)

That said, we are now in a pretty predictable groove and so over the
last few days I have finally had enough down time and enough sleep under
my belt to read. For the first 10 days, I would try to read but I'd
either fall right to sleep or I would be unable to absorb the meaning of
the words, my brain was so sleep-deprived. But last night a momentous
thing happened - I finished a book! It was a sweet and relatively short
novel, but I read it cover to cover, actually got lost in it. It felt
so good.

As long as there aren't any unforeseen issues like storms coming upon
us or sails ripping or engine trouble, now our days are marked with
simple pleasures like finishing a book or re-rigging the fishing poles.
I am starting to complete the projects I brought on board that have
been hanging over my head for months – I fixed Richard's necklace and
made some progress on a hat I've been knitting and ripping out for
months. Another week of this and who knows, maybe I will even finish
another book!

We did have something exciting occur today - an orange buoy drifted
right alongside us. When someone on deck shouted, "a buoy! a buoy!" all
hands came on deck, and we watched as we sailed past this evidence that
another human being had been out here. We quickly noticed that
barnacles were growing on the underside and although a line dangled from
it, it was apparently drifting. It could have been drifting out here
for months, years even?

Within moments we were past it and we each returned to our 54-foot
world atop the Pacific Ocean. But for a few minutes we were given a
glimpse of something outside our little universe. Where had that buoy
been? Who lost it overboard? Where did it start? Where will it end up?