Bruce awakens me today at 6:00am, whispering, "come on deck, you have to see the moonset."  I smile, thinking he has invented a new word.  I climb out of the hatch above our bed to the most magnificent sight - the full moon sinking into the western sky, dark orange reflecting the not-yet-visible sun.  We enjoy the moonset together, then Bruce retires below to sleep.

I turn off the engine as a slight breeze comes from behind allowing for a silent and slow sunrise awakening.  I make some coffee and watch with my warm cup and a perfectly quiet mind (so rare for me).  I smile even wider when I hear the breath of a dolphin and I look just in time to see it leap full-body out of the water.  More and more of her pod mates come by, and since the morning ocean water is not churned up by afternoon winds I see their bodies clearly in the blue of the Pacific ocean as if I am watching them through glass. 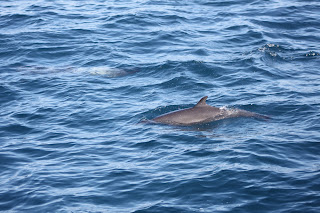 There is a group of three - baby, mama, papa? - that circle around us again and again, then more join them.  I see all of the tricks they do at an aquarium show - 1 1/2 flips entirely out of the water; body out of the water with tail pushing as if "walking" on water; tail slapping.  So I wonder - is it for fun?   Is there a biological or hunting reason?  Probably so, but for now I choose to believe it is a display of joy.

Three hours later the pod continues on their way.   In their place come the rays.   The water appears frothy white where they splash the tips of their "wings" on the surface, then they stick only these wing tips out while swimming in a straight line, appearing for a moment like two sharks swimming side by side.  Finally, in one startling movement, they leap almost vertically at least six feet out of the water, seemingly suspended for a few seconds before plummeting flat down in a loud belly-flop.  A few times I saw their faces as they came straight toward us, and I swear they were grinning from ear to ear as they became airborne, wings outstretched, tips pointing upward like a jet. 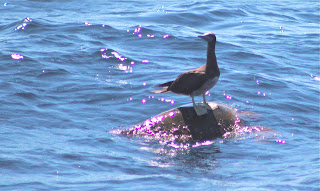 Meanwhile, all morning sea turtles have been drifting by and now I see a large boobie bird (the size of a very large gull) standing on the water up ahead.  As we get closer I realize it is poised atop a large turtle.  Carmen says that the turtle looks old and they must be good friends.  As we pass no more than 20 feet away, neither of them move except for the boobie's head turning to watch us watch him.

The winds pick up steadily and we sail all day, observing a few sea snakes; flocks of hundreds of tiny white birds that swoop like a flock of swallows as if they are one organism (Richard says he saw a large wave behind the group that was about to break on top of them, and in unison they lifted up about a foot to let the breaking wave pass under them before landing back down perfectly in sinc); a tornado-shaped mass of sardines with bright green dorado fish chasing them; frigate birds; a flock of terns.

As we participate in this natural wonderland, we see two ships pass in 10 hours, far off near the horizon.  I feel part of these animal's world today, not part of our human world.   Many times, perhaps because the engine (we call it the "beast") has not been running, I swear they look right at me before diving or flying or leaping out of sight.

"Thanks for visiting us today," I often say (sometimes out load).   I feel honored to receive such visitors to the good ship Northern Passage as we continue our journey south in Mexican waters with our sea dwelling friends.
POSTSCRIPT:  As the day progressed and sunset neared, the wind and seas continued to build, and our calm voyage become an exhilarating ride.  With wind and seas behind us, Northern Passage performed beautifully.  Finally, at 3:00am, when I was tired and thinking I needed to shift with Bruce, our dolphin friends re-joined us, this time glowing green with the phosphorescence.  An incredible ending to a magical nautical day.
Posted by Jen, First Mate S/V Northern Passage at 2:12 PM