Around the North Pacific in 80 Days 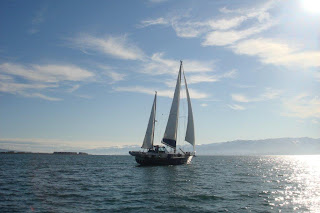 Hi, it's been eighty days since we departed Seldovia on the good ship Northern Passage. We are currently in Newport, Oregon, 1,340 nautical miles from Anchorage as the crow flies, yet we have traveled 2,465 nautical miles due to our winding route down the North American coast and the islands in Southeast Alaska. We have seen hundreds of animals, weathered storms and crossed the Gulf of Alaska, and that's only in eighty days!

The best animal sightings were the whales, both humpbacks and orcas, some even sounding not fifteen feet away! Then in Prince William Sound we saw a shark that must have been at least six feet long!

Crossing the Gulf of Alaska, we ran into eight to to twelve foot seas for about eight hours before calming down after midnight. The next day I woke up with a stiff neck from sleeping in the cockpit. "Only two more days to go," I thought as I lay in the cockpit, then I saw an albatross skimming over the waves and I saw that they had calmed down a lot. I was really relieved. We've had some rough seas since then, but nothing worse than that night entering the Gulf of Alaska.

We've been waiting out a storm here in Newport, Oregon and are leaving tomorrow, bound for Eureka, California. We will be out for two days and I hope for calm seas and a following wind. Wonder where we will be in another eighty days, Mexico maybe?