Early morning coffee on deck, silent sleeping crew below.  Tiger the cat comes out to join me during one of my favorite rituals at anchor.  Perching in a nest made of pillows and blankets, fresh coffee and a journal in hand, I begin the day by listening.  To morning bird songs echoing between steep mountains; to water gently lapping the hull; to curious otters paddling by on their backs, the swoosh of webbed feet propelling them while they stare point-blank at me. 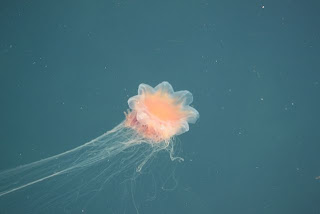 Morning birdsongs amplified by mountains remind me of awaking at our cabin, I recognize those boreal birdsongs echoing across the bay.  Now seabirds chime in, a flock of gulls congregates on the beach chattering about what to do today, where to go.  Twenty feet away, just above my head, a juvenile eagle wings by, the air so still I hear before I see the majestic bird.  Bobbing at anchor, I feel part of this natural world, a lucky observer of earth's uninhibited wonder.

This morning's misty serenity could not be more different from the noisy, tumultuous movement of yesterday's journey at sea amongst 12-foot breaking waves and 20+ knots of wind.  I felt connected to the power of the sea then, felt the adrenaline rush of taking risks and surviving.

We departed Homer in gentle 3-4 foot rolling swells and light winds.  Carmen steered us out of Kachemack Bay while Richard "rode the waves" on the bow, arms outstretched and shouting with excitement, only returning to the cockpit to shout at us to "come out here, it's AWESOME!"

Two hours later the wind picked up to 20+knots and the gentle rollers became 12-15 foot breaking waves on our starboard side, knocking us over 20 degrees or more.  For Richard, Carmen and myself, this became our first test of our sealegs.  (Bruce has been in far worse - which is why we are all okay with going on this journey - he is truly our captain, an experienced seaman.)  As Richard said a few hours into it, "I am definitely out of my comfort zone."  Day two on the water, and we were put to the test.

In order to stabilize the rocking, Bruce donned foul weather gear, lifejacket and tethers and raised our Mizzen and Staysails.  I steered.  What a feeling negotiating our 35-tons vessel through the swell and waves created by 20" knots of wind and a brewing storm!  I know from pasty experience that this is the only place for me in weather like this - at the helm, as fear and seasickness creep in if I go belowdecks.  Bruce and I naturally found our roles.  He goes on deck when needed as well as below to cook and clean up.  I stay above, feet wide and braced against the cockpit walls, arms muscling the 4-foot diameter wheel through the waves.  In my position at the helm, I feel charged and alive.


Meanwhile, Carmen (9) became afraid.  Tears streaming down her face, dramatic and feisty with an all-or-nothing attitude, she declard, "I want to go home!  I will never ever go out on this boat in weather like this again!"

At first, Richard (11) retained his excitement, stating that it was FUN and trying to reason with his sister, although he did retreat to the cockpit to stay warm and dry.  We played word games to pass the time, 20 questions and Amnesia.  We even laughed when Richard looked below during one big knock-down and saw the laptop literally fly across the cabin, along with dishes and books and all kinds of other things that were not properly secured.  Then the BIG ONE came, a set that really knocked us over, water gushing in the porthole that we had left open in the galley.  Bruce went below to close it and clean up while we three became silent in the cockpit.

This is when Richard became literally white-knuckled.  Hands clutching to a railing, all color drained from his face, goose bumps rose on his arms and he began shivering, his knuckles literally white.  It is amazing how we as parents rise to the occasion for our children.  If Bruce and I were alone, it is very likely that I would have taken on both Carmen's and Richard's reactions (where do they get it from anyway?)  Instead, I became brave - not the complaining insecure suburban mom who has been all-too-often present in Anchorage, but instead I become the survivor, the self-confident believer, the Jen who moved 4,000 miles away for love and adventure 15 years ago.  But I digress....

After these largest waves knocked us over, we decided to head in to the nearest anchorage, Port Graham.  Turning so the waves were more behind us than on our side, the adventure wasn't quite over yet.  Bruce took the helm to negotiate a reef just outside the entrance with a push from the sea that made our large steel vessel feel like a rubber ducky.  Sure enough, once beyond the reef, we were all elated to enter the calm waters of the bay.  Looking back over our shoulders, it was hard to believe shelter was so close to the storm outside.

Suddenly the mood changed from fear to excitement.  As the blood rushed back into our faces and hands and adrenaline kicked in, the kids started bouncing around the deck, taking pictures, joking with each other, happy to be alive and with a story to tell.  They went below to assess the damage.  No, we were not prepared for that kind of knock-down weather so clothes, dishes, books and computers were scattered about after taking flight across the cabin.  Another of many lessons learned - batton down all belongings as if the worst storm were approaching, no matter what the predictions.

We tidied up, made a fabulous dinner, and Bruce and Carmen even baked apple muffins for the morning.  We slept like babies.

Now it is 10:00am the next morning.  We are the only boat in sight in this idyllic anchorage.  I write while Bruce is takes advantage of the still bay by going up the mast to install a new windvane and radar, and take photos. 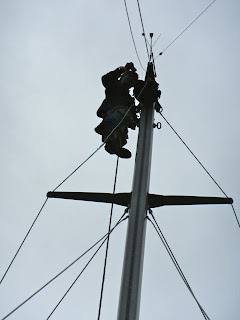 As we continue to head south, we will experience warmer weather and calmer seas (both of which we are looking forward to), yet we will also enter more populated, "civilized" worlds.  Untouched natural places like these Alaskan coves that we are used to will become more and more scarce.  I wonder what our Alaska-born children will think of that, or if they will even notice.  Resilient and present, they teach me every day how to live with integrity and openness.  As my friend Julie told me back when my first born was only a tiny infant, they are our little Zen masters.